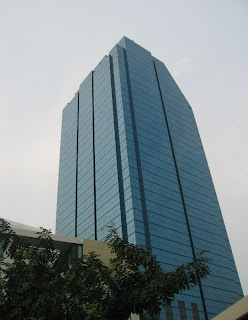 It is typical modern marble floored building that could be anywhere in the world. The Ford AAT production plant is about 2 hours drive away. 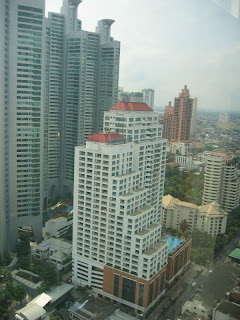 The view backwards to the hotel we are staying at. (The white stepped building.) I'm on the 20th floor, Nicole the 21st. 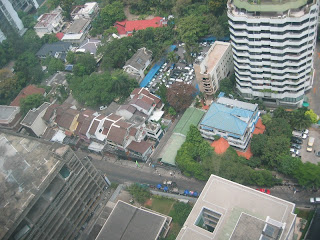 Looking down.. We are 31 floors up. A mere pittance compared to the 64 floor sky bar! The unfinished carpark that I mentioned in an earlier post is in the bottom left of the above picture. The ground floor contains a supermarket with a built in restaurant. They sell Tim Tams there, but only 120g in size as opposed to the 200g variety at home. The extra weight has been taken out of the chocolate & filling rather than the biscuit so they aren't near as nice. Curiously the packet also says not for sale in Australia or New Zealand! 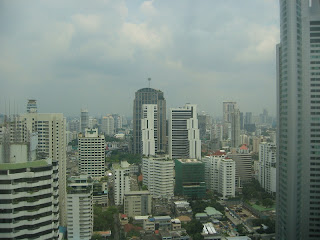 Another shot from 31 floors up. Bangkok is quite a large city and has a fair bit of smog/cloud cover. Only once I think we've actually seen the sun; certainly we have not seen a sharp defined shadow. Today was a public holiday, and the traffic seemed better than normal, and, whether genuine or imagined, better visibility towards the horizon. 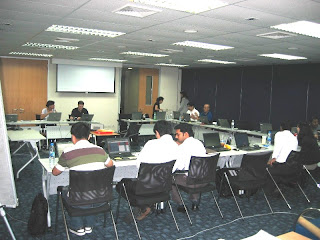 ﻿Our conference room. Demonstrators Jennifer & Brian on the far side. Nicole on the way out the door, probably for another cup of coffee!
Posted by James at 20:48